ALS, Multiple Sclerosis, and Parkinson’s disease are often overlooked, poorly understood, serious chronic diseases, after cancer and heart disease. These three neurological diseases are rising at an alarming rate. An aging population, and environmental pollutants and toxins which are often seen as the price of industrialization, are implicated. Diagnosis of ALS is viewed as a death sentence – with no cure – according to the latest medical science. These three neurologic disorders were rare until post-industrialization, and have become more common. Just look around you. It may be someone in your family, a friend, or a member of your community. Lyme disease has also been blamed, but how?

Are we overlooking some of the “forensic evidence of hidden dental and parasite problems” that can be easily mistaken as Lyme and coinfections? The nervous system as a meridian system was not well defined in classical Chinese acupuncture. In the 1950s, Dr. Reinhold Voll of Germany described the energetic relationship between meridians and the western concept of the nervous system in his monumental work, Electro-acupuncture according to Voll (EAV). According to Dr. Voll, the Nerve Degeneration (ND) meridian is located on the index finger, mirroring the Large Intestine meridian. The ND meridian is influenced by many elements, manifest through the Trigeminal nerve by the Dental meridian, and through the Vagus nerve by the Gallbladder meridian. These two are the dominant meridians controlling the entire central and peripheral nervous system. Other meridians that contribute to nerve regulation include the Bladder, Triple Warmer, Governing Vessel, Stomach, Small Intestine, Large Intestine and Kidney meridian. They all interact, regulate, and create a complex neural network beyond the understanding of Western medical science.

I have had a handful of successful responses with ALS patients, and wrote a story about one of them, Ron J, in, “ALS Patient’s Unexpected Journey: My Patient as My Teacher.” I was invited to give a lecture in Houston at the ALS Summit in 2019. The slide below indicates that he had a Nerve Meridian Disorder, but also his left and right dental, allergy-immunology, Heart, Liver and Gallbladder meridians were out of balance. A green bar means normal; blue meridians are out of balance. 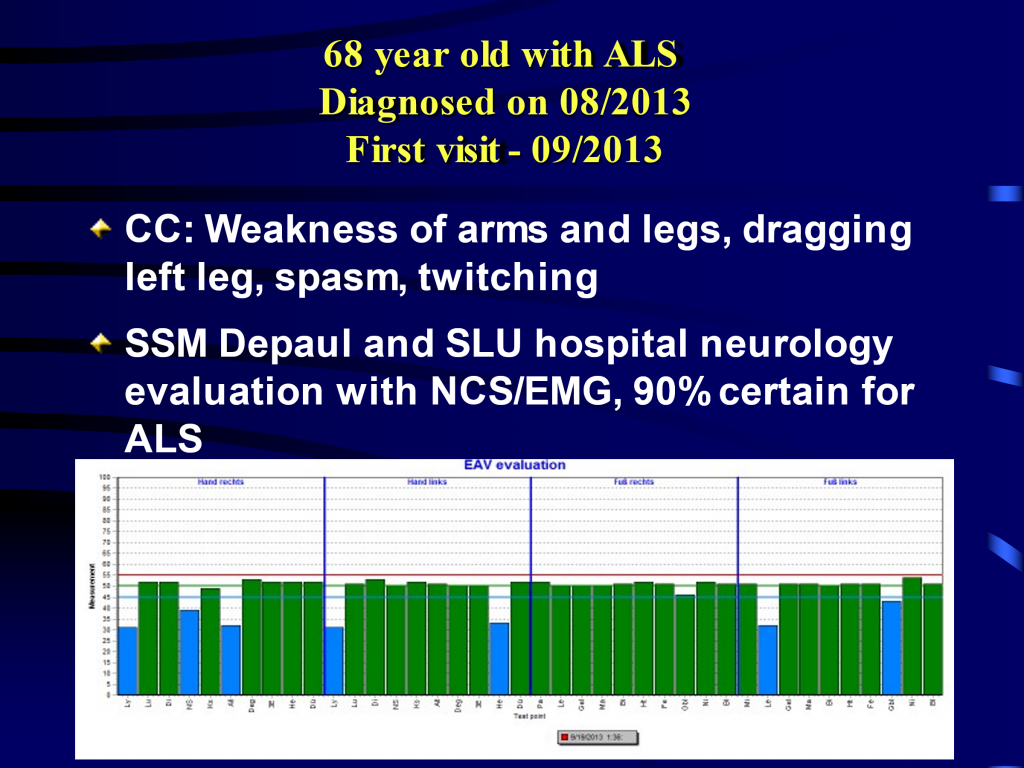 Additional ALS case studies include a dentist, architect, auto mechanic, triathlete and dental hygienist. Some overcame their ALS and some died or were lost in follow up. Ron wrote his of his experiences in fighting against ALS in his book, An Unexpected Journey: Searching for a Cause and Finding Hope in the Battle Against ALS. His fight against ALS was successful. Initially, his neurologist was 90% sure he had ALS and told him he would be in a wheelchair soon. Now almost 10 years later, Ron can ambulate well, and his neurologist said he must have made a mistake and Ron does not have ALS. This means ALS is a clinical diagnosis, not a death sentence. See the PubMed article, “Organophosphate neurotoxicity to the voluntary motor system on the trail of environment-caused amyotrophic lateral sclerosis: the known, the misknown and the unknown.”

I am now taking care of a retired Navy Captain with rapidly progressing ALS; he is in wheelchair. He has 11 out of 40 meridians out of balance, multiple infected teeth under crowns, cavitations in his jawbones, and massive environmental toxins exposure including mercury, perchlorate, organophosphates (herbicides), petrochemicals, Glyphosate, and fungal, mycotoxin and parasite infections. His recovery will be slow and he is fighting against time. He understands his enemies and endorses our battle plan to reclaim his health from ALS.

ALS, MS and Parkinson’s disease are on the rise, and patients do not have time. Time is ticking and they need more than a double-blind placebo controlled random clinical trial (RCT) to find out which medications may help them. Patients need a real-time focus on understanding, detecting, and addressing major contributing, synergistic factors now. We can detect the missing links – hidden dental and parasite infections and environmental toxins – and connect the dots by applying a modern, disruptive technology called acupuncture meridian assessment (AMA), based on an ancient meridian medical system. To summarize the main points and observations from my 2019 ALS Summit presentation, we can focus on such areas as:

Dentists and physicians taking care of ALS, MS and Parkinson’s disease patients – and patients themselves with neurological disorders – should read the book by Dr. Patrick Stortebecker, MD, PhD, Dental Caries as a Cause of Nervous Disorders. In my personal experience, in most cases, the patient had dental problems despite a normal dental X-ray using the state-of-the-art, cone beam CT (CBCT) dental scan. Is the rise of nerve degeneration diseases a product of post-industrial pollutants and toxins and hidden infections, accelerated by modern dentistry?