In classical acupuncture, the Spleen/Pancreas is named the principal organ of digestion. It is responsible for transforming food into nourishment and for transporting digested foods and fluids from the stomach, and distributing it into the body. If you cannot supply and feed the whole Army of bodily components, the whole military system will collapse in a domino effect.

A 52-year-old military colonel from Washington, DC came to see me with a long list of symptoms and medical diagnoses, a nightmare for any physician to deal with such complex problems. He did not have a roadside bomb injury or PTSD. He was in charge of drug movement monitoring in South America for illegal drug trafficking and got sick during an onsite field visit to Bolivia, Columbia and Peru. He was air-evacuated from Bolivia to Walter Reed Army Hospital and later transferred to Navy Medical Center. He said he felt 50% better, but had a whole list of lingering symptoms, was working part time, and came to see me with many troubling symptoms and diagnoses.

I conducted acupuncture meridian assessment (AMA) and found he had 17 out of 40 meridians out of balance. Among them, his spleen/pancreas, small intestine, gallbladder, and large intestine meridians were his primary problems. If these conditions were not corrected, he would be in a precancerous stage to develop tumors somewhere in his weakest immune-deficient organ. When I see so many meridians are out of balance including the spleen/pancreas meridian, there is always an automatic high index of suspicion for developing precancerous tumors.

Initial AMA Testing for Military Officer: 17 Meridians Out of Balance 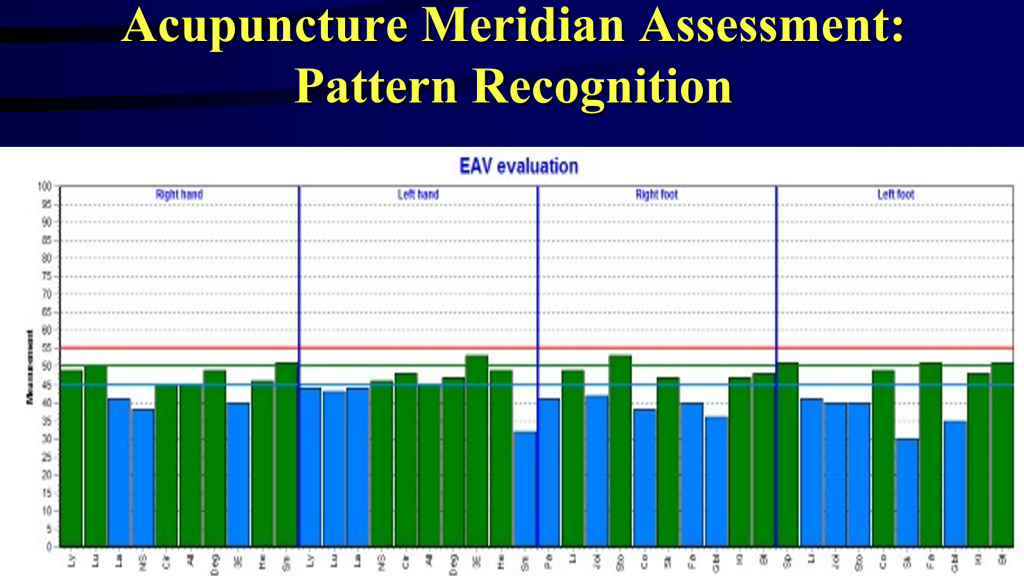 After two rounds of ivermectin and tinidazole, he had a dramatic increase in his energy level and sense of wellness. For the first time in four years, he was feeling back to normal. However, after initial dramatic response, his symptoms started coming back, and he had to be treated with a different combination of parasite medications. He also had dental problems, heavy metals (mercury, lead and nickel), and multiple allergies to address. He then had a major setback with a dental operation that took a wrong turn and he developed severe complications. The interconnections between teeth, dental and other organs and systems of the body are illustrated in the Tooth-Organ Dental Meridian Chart on my website and in my second book, AcciDental Blowup in Medicine: Battle Plan for Your Life.

Another case was a retired one-star Brigade General who came to see me some years ago with a working diagnosis of Fever of Unknown Origin (FUO) for several years. He has been evaluated at Walter Reed Hospital, the best military hospital, and by an infectious disease specialist at the Centers for Disease Control (CDC). He said he gave over one hundred vials of bloods, urine, and stool samples to CDC for evaluation. There were no significant findings or improvement. He was officially diagnosed with FUO. When he came to see me, he was still complaining of a 102-103 degrees Fahrenheit fever, bone chills, elevated muscle enzymes, back cramps, lethargy, poor sleep, nocturnal urination, and muscle cramps.

Acupuncture Meridian Assessment (AMA) indicated his primary problems came from Large Intestine, Gallbladder, and Liver and Spleen/Pancreas meridians. He was started on high doses of ivermectin and pyrantel pamoate for ten days. One year later, I saw him again in Washington DC; he said he was feeling well and his FUO had been resolved. His fever was caused by parasites. Previously, I wrote two case study articles on UFO and FUO, Parasite Guy on UFO and FUO: Aliens and Parasites, and COVID19, FUO and UFO Phenomenon: Ivermectin to Treat Fever of Unknown Origin (FUO).