Palladium, not Polonium! Am I Dead?

What can we learn from my palladium poisoning misadventure? This year, 2018, was a shock for me when I found out in my yearly routine checkup that I have been poisoned with palladium. It did not show up on previous heavy metals tests. I have never seen that extremely high level of palladium. Among the thousands patients I have seen during the last 25 years, only a few patients had palladium toxicity. They all had cancers and all died, and my palladium level was much higher than their levels.

Keep in mind that there are fast and slow acting poisons. You may have heard of polonium as a deadly poison used to assassinate an ex-Russian spy, Alexander Litvinenko, in London in 2006. Polonium-210 was spiked in his tea at a business meeting. A rare, short acting deadly radioactive metal discovered by Marie Curie, polonium can be delivered through inhalation, swallowing or broken skin.

Toxicologists estimate that one gram of polonium-210 could be enough to kill 50 million people and harm another 50 million people from radiation sickness. Treatment includes supportive care for radiation related symptoms of nausea, vomiting, anorexia, hair loss, low white blood cell counts, diarrhea and bone marrow suppression. Chelation therapy agents such as DMPS, DMSA and penicillamine have been used bind to polonium and eliminate it from the body. I wrote on this subject in my book, Accidental Cure, and in short articles, Chelation Therapy, and Chelation Therapy for Heavy Metal Toxicities Even When Least Suspected. The Russian government denied wrongdoing but, then, most governments deny wrongdoing anyway. I would not mess around with Russians!

The most common heavy metal toxicities I have seen in my practice are mercury, lead, tin, tungsten, aluminum, nickel, and cadmium. Hair mineral analysis is a good screening test for toxic metals. Provoking chelating agents like DMPS, DMSA or EDTA are the most accurate way of detecting deeply embedded toxic metals in tissues. Here are common symptoms associated with mercury and lead: 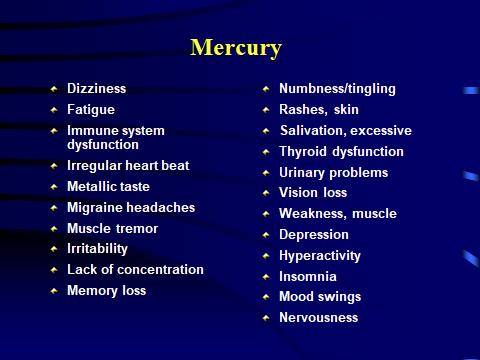 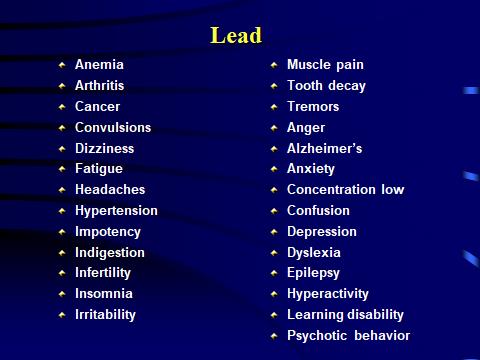 Heavy metal poisoning is a lot more common than you may think. Unfortunately, it is not a part of standard medical school training. But have you heard of palladium poisoning? Palladium is used as an industrial metal as a catalyst and in dentistry but is not a common medical problem. Twenty five years ago, I had two separate accidents with a broken mercury thermometer and acute mercury poisoning. Luckily, I was just trained on how to measure heavy metals and using chelating agents; I was able to treat myself. Since, I have been checking for heavy metals (20 different metals) on all my patients with chronic, medically unexplainable problems, and I get a yearly update on the heavy metal test for me.

My initial reaction to my extremely high palladium toxicity was, “Am I Dead?” Am I going to get cancer and die like many of my patients in the next few years? Is somebody trying to poison me? Russia? Big Pharma? After all, whenever one of the alternative, integrative medicine physicians dies under suspicious circumstances, I get a phone call from my patients checking on me. My mind goes through wild spinning, and I take a deep breath, check my pulse, and do a reality check.

When the level is far outside of normal range, you need to verify by re-checking the level. I checked three times and the level was climbing even higher. I checked again, my pulse and the reality check. I am not dead yet. I started calling some of my physician friends. One anti-aging physician asked me to check my hormones. My hormone levels were perfect and he could not help me. He was envious of my hormone levels. I figured I may die from palladium poisoning with perfect hormone levels. What a comforting thought! The other physician asked for a genetic test for detox pathways. The genetic test was normal for all detox pathways including MTHFR genes.

What is the next step? Palladium is highly toxic to the kidneys, liver and nervous system and I began to have muscle cramps and spasms and stopped exercising. I have seen too many patients die from over-exercising. Palladium is also toxic to many enzyme functions including carbonic anhydrase, a zinc dependent enzyme. Palladium can block carbonic anhydrase in the cells and build up carbon dioxide at the cellular level, like a “slow cellular strangulation” of mitochondrial metabolism. Carbonic anhydrase converts carbon dioxide to carbonic acid and is highly sensitive to many toxic metals.

All my cancer patients who died from palladium toxicity also had dental problems, parasites, fungal, bacterial infections and other heavy metals exposures. The next step was checking my cancer profile. My PHI (Phospho-hexo-isomerase) was very elevated, indicating my cellular respiration was switching to anaerobic cancer metabolism. I started DMPS chelation therapy.

My palladium level is gradually coming down and my PHI level is coming down to the normal range, indicating cancer metabolism can be reversed; otherwise, cancer may manifest 3-5 years down the road. My palladium level is far from safe yet but at least it is coming down slowly with chelation therapy. I tell my fellow physicians training on acupuncture meridian assessment (AMA) that if I die within next few years, I want to make sure they know that I died from palladium, not polonium poisoning. Hopefully, my tombstone will say, “Palladium, not Polonium: Prevention and Healing is Golden,” many, many years later. I hope we all can learn from my unexpected palladium poisoning misadventure. I will become an expert on palladium toxicity by default. How did I get palladium???