The Seventh Sense and Fat Electrons: Meridians as Ancient Matrix of Brain-Gut-Immune System

Three years ago, Jonathan Kipnis, PhD, now Professor of Neurology, Neuroscience and Neurosurgery at the Washington University School of Medicine, wrote, “The Seventh Sense” in the Journal of Experimental Medicine and Scientific American. I was excited reading his article on the central nervous and immune system connection, and have carried it with me the last three years. I will at long last share my thoughts on the brain, immune cells, and the interconnectivity of the acupuncture meridian matrix.

Fat electrons called Muon g-2 were recently discovered at Fermi National Accelerator Lab in Illinois. The Muon is the heavier cousin to the electrons that orbit an atom’s center. Muons are 207 times larger:  massive electrons. Particle physicists and theoretical physicists were excited about the magnetic “spin” of Muons: it made the front page of the New York Times, because it is 0.1% off what the Standard Model predicts. There was no “Fat Shaming” on Muons and I am baffled by their excitement upon taking a quantum leap into these unknown sub-particles of Nature.

The five senses have been long known to us; senses of smell, touch, taste, sight and hearing. The sense of position and movement, “proprioception”, is often referred to as the sixth sense. The “Brain-Gut-Immune Connection” is emerging as a new unrecognized seventh sense. Neuroscience textbooks describe the brain focusing on the business of operating the body, including all six senses, and the immune system on defending it. Mounting evidence indicates that the brain and the immune system interact routinely as a surveillance organ that detects and senses foreign invaders in and around the body and informs the brain about them by means of cytokines, chemokines and other “unknown” signals. One of the unknown signals may be the acupuncture meridian matrix described by ancient civilizations.

Recent findings show a highly interactive communication between the brain and entire immune system. You may experience sense of uneasiness or feel dis-easy before you get sick with a sense of impending doom and malaise, which is then followed by a cascade of symptoms including fever, pain, and full activation of your immune system to fight foreign invaders.

Cytokines released by peripheral immune cells can affect the brain. They presumably gain entrance through brain areas that lack the regular blood-brain barrier and could directly impact the brain through the Vagus nerve which runs from the gut to brain: the Brain-Gut Connection. From the teaching of Electro-acupuncture according to Voll, the Gallbladder meridian is the main meridian system that regulates the vagus nerve.

Our immune system, innate immunity and adaptive immunity are hardwired into the brain. That would make it a seventh sense according to professor Kipnis. Cytokine IL-17 can interact with neurons in the brain cortex and can alter behaviors related to autism spectrum disorder per Kipnis.

My article, Medical Acupuncture on Gallbladder Meridian: Therapeutic Illusion on IBS and Autism, covers a young severely autistic boy who responded to parasite medications prescribed for his mother, who gave some to him without consulting me. His ATEC score dropped from 109 to 4 and he is considered fully recovered. He also had high mercury, food allergies, and fungal/mold toxins. A single case does not represent the true picture of autism but gives you new insight into what is possible.

The Gallbladder meridian, pictured below, travels from the eyes, brain, and neck down to the fourth toe. 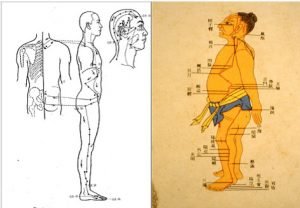 The Gallbladder meridian is one of the longest and most complex meridians that controls body movement, brain, gut, autonomic nervous system and cognition. Disturbance of the gallbladder meridian has been associated with migraine headache, concentration problems, eye/ear problems, neck pain, indigestion, abdominal pain with nausea, and hip, knee or foot pain. The gallbladder meridian influences our central nervous system: the mid-brain (mesencephalon) including the center of sleep and waking rhythm, the rear part of the forebrain (diencephalon) sleep center, the cranial nerves including the optic and trigeminal nerves, the parasympathetic nervous system including ciliary optic ganglion, the Vagus nerve in the medulla oblongata, and the cranial part of the sympathetic nervous system. (Dr. Voll’s German Electro-acupuncture Reference Manual).

When I describe acupuncture meridian assessment (AMA), parasites, meridians, and brain, gut, and immune system connectivity to an audience at a conference, I feel like I am talking to a Wall of Skepticism for good reason. There is an insufficient hard database of finding ova, parasites, or mycotoxins in the stool test or blood test. I am speaking a foreign language called acupuncture meridians, a part of the language of nature no more different than the Muon g-2.

When some patients complain parasites are crawling under their skin, rather than dismissing them as suffering from Delusional Parasitosis, it will be worthwhile to treat them with parasite medications based on empirical guidance from AMA or some other form of energy testing, such as muscle test or autonomic response testing (ART) developed by Dietrich Klinghardt, MD, PhD. What they are sensing is not a delusion but an immune system alarmed and screaming – via cytokine release or cytokine storms – to tell their brain to take action.

The seventh sense described by professor Kipnis – the brain-gut-immune connection – may detect parasites, pathogens or other problems and send signals to the immune surveillance system. Muons are a part of Nature that needs to be better understood as much as the ancient acupuncture meridian matrix to connect the brain, gut and immune system. Medical professionals interested in learning how to measure the subtle energy fields of acupuncture meridians to detect parasites, fungi and hidden dental problems can check my website for a Special AMA Training on these subjects and techniques on April 22-25, 2021 and August 26-29, 2021. This training – my JEDI Project – is designed for MDs, DOs, and DDSs to learn new tools beyond the Therapeutic Illusion.